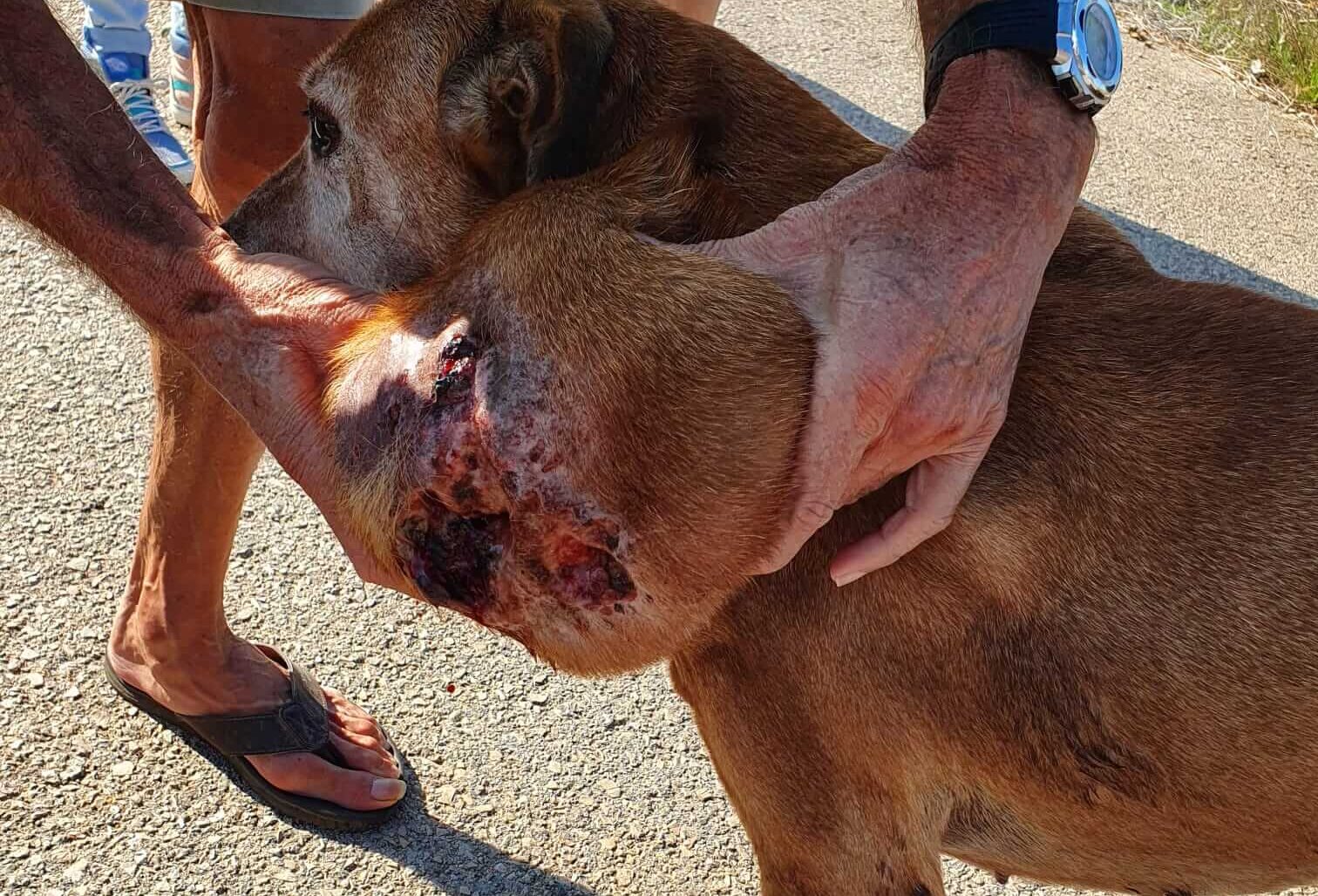 The long September was a highlight for us animal welfare activists
Written this month by Farah herself.

Leona our soul on 4 paws

An alarm call and a male voice, which asked me for immediate help. A bitch was seriously ill and had been walking around with a huge tumour for a long time. Neighbors and pedestrians complained about it to the owner, but he only said: The tumor will fall off by itself. At the same time the man who had called me sent me a picture of this poor bitch and I did not think a minute longer and drove off in the direction of Alcaudia, about 50 km away from our Finca Noah. Arrived there, I saw the poor soul with this enormous tumor on her neck. After a short conversation with the owner and a letter that we- the Animal Police would take care of the poor bitch about 11 years old and would pay for all costs of an operation, he gave me the bitch within 10 minutes. You can bring her back to me, dead or alive.
Immediately we drove to the next known vet, who immediately took care of poor Leona. It would be best if he could operate on the dear little dog the very next day. Even he would not have seen such a huge tumour very often after so many years of practice. He promised us very firmly that he would operate on Leona the very next morning, something we had been waiting for so much. I asked the doctor to leave us alone with Leona for a moment and I promised her that I would do everything humanly possible to give her a life without a tumor again. The whole night I could not sleep and had only Leona in my head and prayed that my decision to have Leona operated was the right one. Since the lady was already 11 years old. Anyway, once again I acted with my heart alone and today I am overjoyed about the decision to have Leona operated immediately and successfully! Leona became in the clinic in the shortest time, the darling of all involved! She fought so hard and just wanted to live. She was happy when visitors came, ate like crazy and loved her rest when she was alone. She recovered so well that Leona was allowed to go to a foster home after 5 days, which Lilian had organized in the meantime.
A foster home like in paradise, the dear Silke has agreed to look for Leona and to care for her. After 2 days I already got a phone that Leona could stay forever with Silke and Leona could spend the rest of her life there! So, beautiful!
At that time - on the day when I drove Leona to the clinic, I had also made a Facebook post for her, because the surgery alone was set at about Euro 2000. This post hit like a bolt of lightning! So many people took an interest in Leona's life and donated generously. I am still speechless about it, because we have collected until today - say and write over Euro 3000.-. For this we would like to thank you from Animal Police! We promise you that we will continue to support the poorest and give them a voice. How Leona is coping with her life with Silke, we will be happy to report in the next newsletter.

Luna on the way to her new home

Luna, our 1st bitch at Finca Noah, who now lives in Germany with the P. Kelly family.
Here are some pictures from her new home with her friend Linda.

Every time I see pictures like this, I know that I am doing everything right and that we - the Animal Police - really need it! 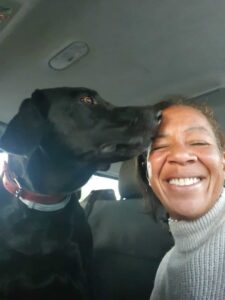 As you may know, my knowledge about sheep is not really great. Paul and Paula were our first sheep at Finca Noah. But now our sheep family is growing with Mary, Joseph and the super little crazy Jesus.

I am still a sheep professional, the three keep me really on the go! Hardly arrived properly with us on the Finca Noah, we were allowed to close sponsorships for the three. Hurray....ich thank you for that too, you are just great!

When I went shopping and what I saw there, once again blew me away. In a garage, where you can get food for the animals, (I always go there when I need sheep milk powder for the three little sheep again, there was a cage with rabbits in it in the corner on the floor. No water, no food- just sitting in the blazing sun. I went to the owner and asked him what was going on. Where was the water for the animals or just some food? He said: They will be picked up sometime today and after that they will get everything but food and water and just laughed in my face. Of course I was pissed off and immediately threatened him with the police and made it clear to him that this was not okay and that he was black market trading here. Shortly he offered me the eight rabbits for 80 Euro! What should I do - of course I paid the money and took them right away. 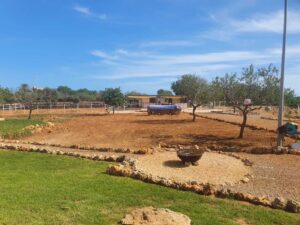 200m2 for a big bunny paradise

Now we build in the 2nd step a hare paradise for these 7 hares with us on the Finca Noah. Also with rabbits we will still get along! Unfortunately there are only 7 rabbits today, one of them wanted to get to know the wide world and escaped without saying anything! Who knows, maybe he will come back when the bunny paradise is finished!

Hard to believe, but our island is like dead. Through Corona are now also the last holiday guests gone. Unfortunately, many people who have lived here for years are going back home. The bad thing is, they just leave the animals here to their fate. We receive so many emergency calls from people who are about to leave.

I really have no words, how can dogs, which you had for years - cats, horses - loving animals, which have accompanied you; just their fate and run away?

You can't imagine what people do to save their own skin?! They leave everything behind - what makes a human being?! Dignity, love and respect. some kind of standard you're born with? What is happening to our world?

In any case, here on the island we continue to fight for those who have no voice and this to the end of the world.

No Animal Police man/woman, will ever leave an animal behind, this I can swear to you! 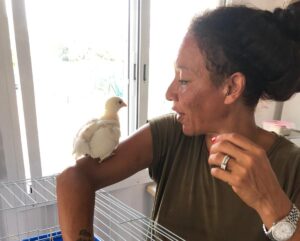